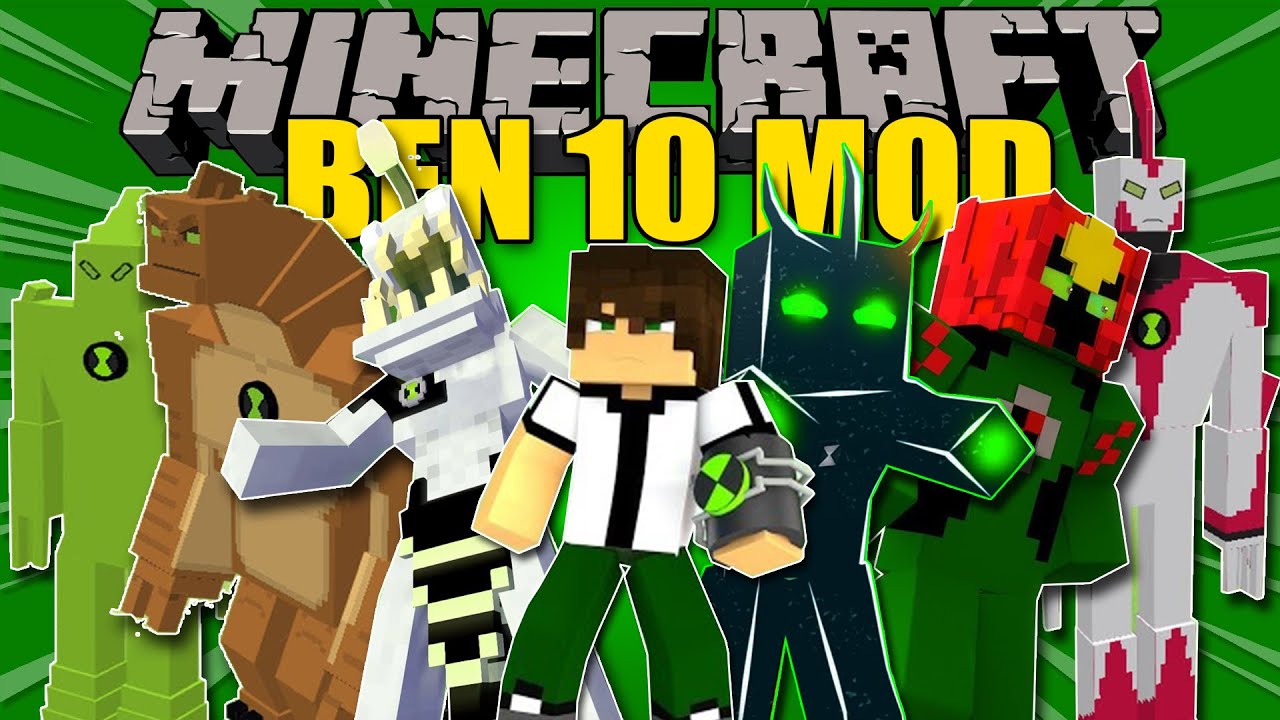 Do you like the animated series “Ben-10”? Earth defender Ben-10 and his aliens and friends are already available in Minecraft PE with the “Ben-10” mod!

Benjamin Tennyson (Ben-10) is a kid who was destined to find an alien Omnitrix device. Ben with the Omnitrix can transform into dozens of different aliens to fight the monsters and villains of the universe. But Ben cannot save the world of Minecraft without the help of his cousin Gwen’s magical powers and Grandpa Max’s fighting skills. Ben’s enemies also have extraordinary abilities like Ben and his companions, but our hero Ben won’t let them win and conquer the world of Minecraft. So, what are you waiting for? Find out how Ben and his companions use their powers and skills to defeat their powerful enemies in the world of Minecraft.
So what’s in store for you in Minecraft with the Ben 10 add-on? 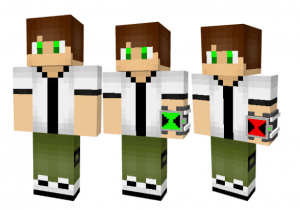 Benjamin Tennyson: is a kid who can use omnitrix to fight his enemies. Ben-10 will spawn without the omnitrix. You must put the Omnitrix next to him so he can pick it up and use it to transform.

How do I make Ben with Omnitrix?

Omnitrix Capabilities: The Omnitrix is a clock that Ben uses to turn himself into an alien. The clock has a limit, such as the time spent in the alien transformation.

Ben’s ability with the Omnitrix: Once Ben gets the Omnitrix, he can turn into any alien he wants when he sees an enemy. Ben’s time in alien form is 80 seconds. Once the time is up, Ben will return to his normal form and his Omnitrix will turn red and recharge for 30 seconds. Ben can use the Omnitrix again when it turns green. 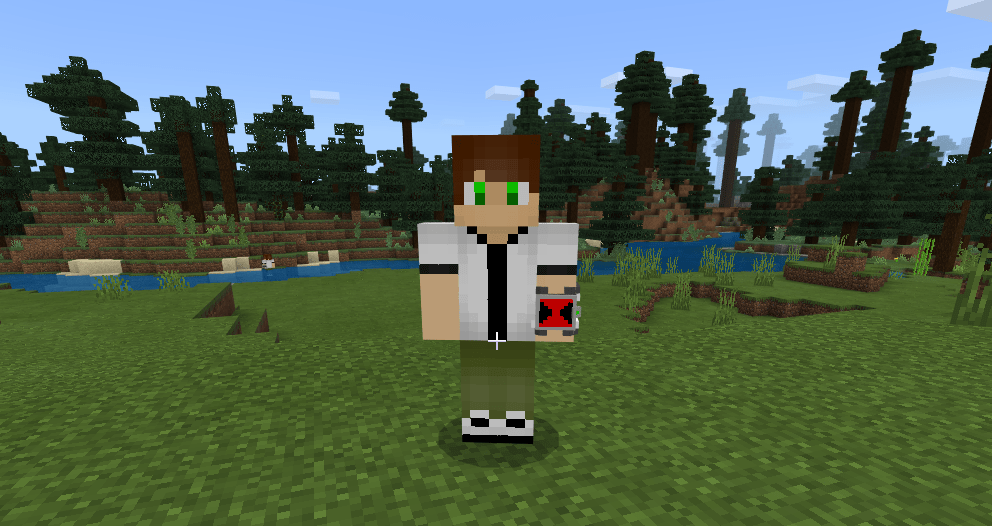 Once you successfully appear in your Minecraft world, you will see a falling meteor falling from the sky. This meteor is a ball with the Omnitrix inside, just like at the beginning of the classic Ben 10 story, where Ben discovers the Omnitrix. 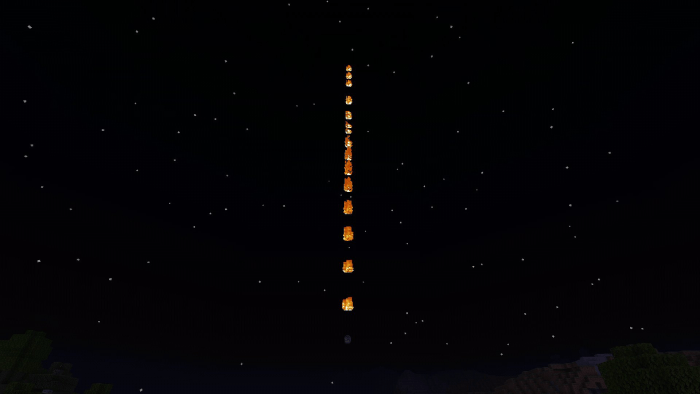 All of Ben’s superheroes have 200 seconds before Ben returns to human form. Once any of the aliens do too much damage, they automatically turn back into Ben.

Wildmutt: An alien dog with sharp claws and a high jump. He is blind but has heightened senses. 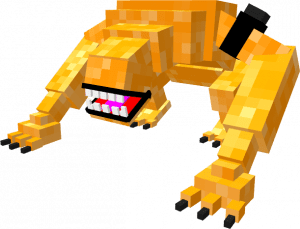 Four Arms: A four-armed alien that has enormous weight, size, and strength. 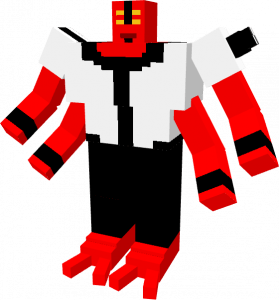 Greymatter: A dwarf alien. He has very weak attacks but great intelligence and can hide from monsters easily.

XLR-8/Accelerate: An alien with a tail and great speed that has sharp claws. 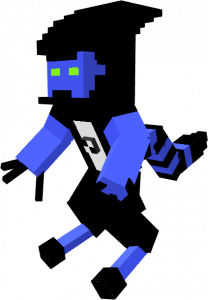 Upgrade: A galvanic mechamorph that can fuse with mechanical devices to control them and enhance their performance. Fires lasers.

Diamondhead: An alien whose body is made of diamonds, capable of shooting diamonds and summoning diamond spikes. 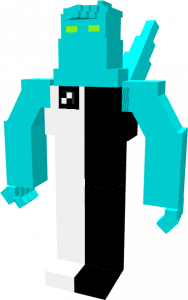 Ripjaws: an amphibian that swims quickly in water, having sharp claws to attack. 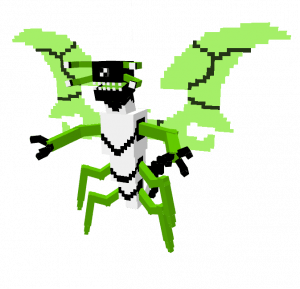 Ghostfreak: A ghost that moves freely through solid objects and has the ability to become invisible. 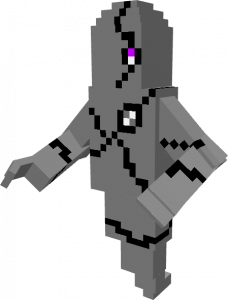 Cannonbolt: An alien with armor and powerful claws. Can morph into a spinning, heavy ball. 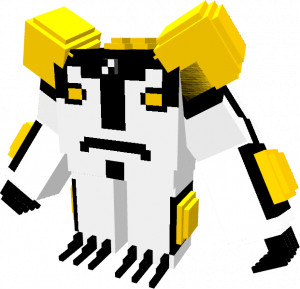 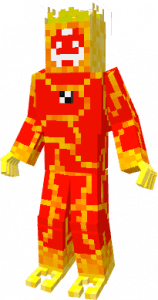 Ditto: A child-sized alien with large hands, tiny feet, 3 fin-like growths on its head, and enlarged gem-like sensory nodes, Ditto has the ability to reproduce itself or breed its clones. 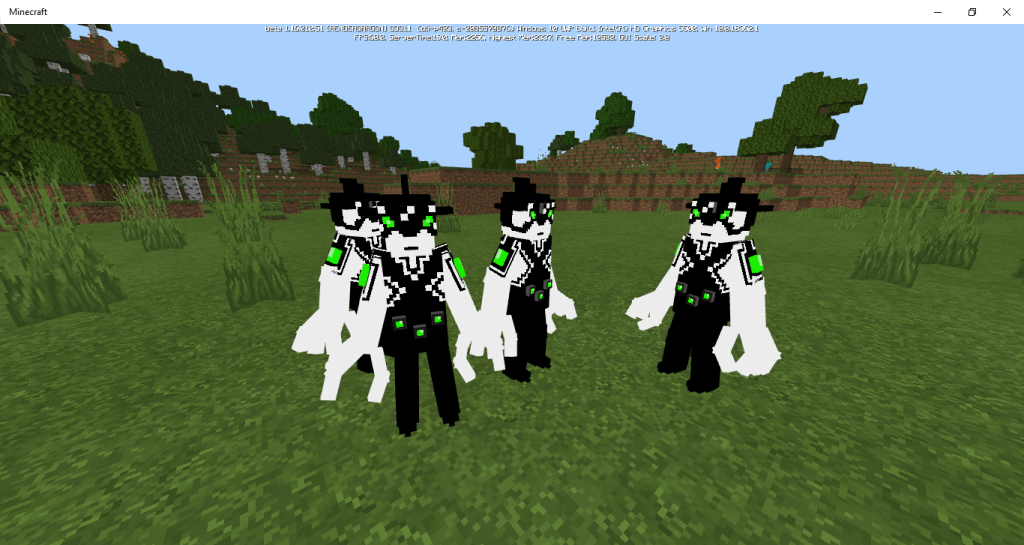 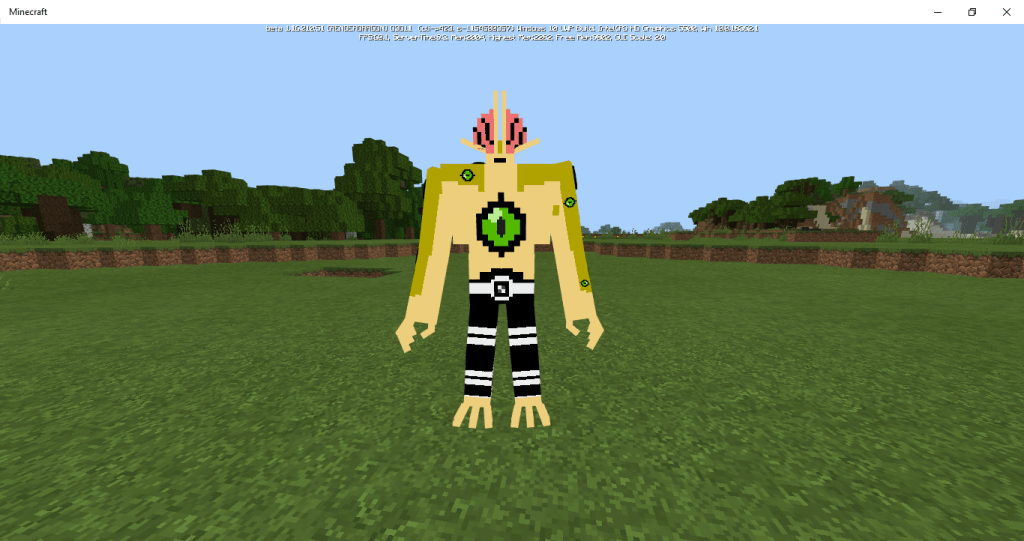 Wildvine: A humanoid plant with one eye on its head and vine-like legs and arms. It has capsules on its back which it uses to explode. 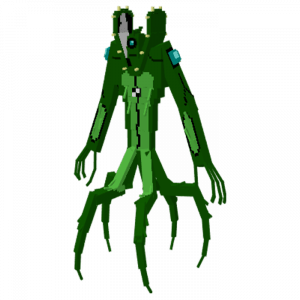 Benmummy: is a mummy-like alien with bandages made of an alien material that feels like old cloth but has no elasticity. 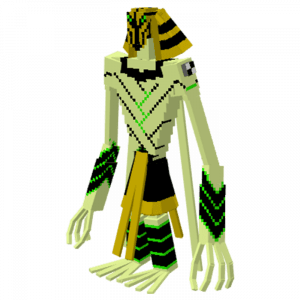 Benwolf: A wolf-like alien with great strength, senses, and the ability to emit a sonic howl. 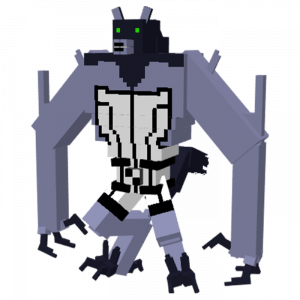 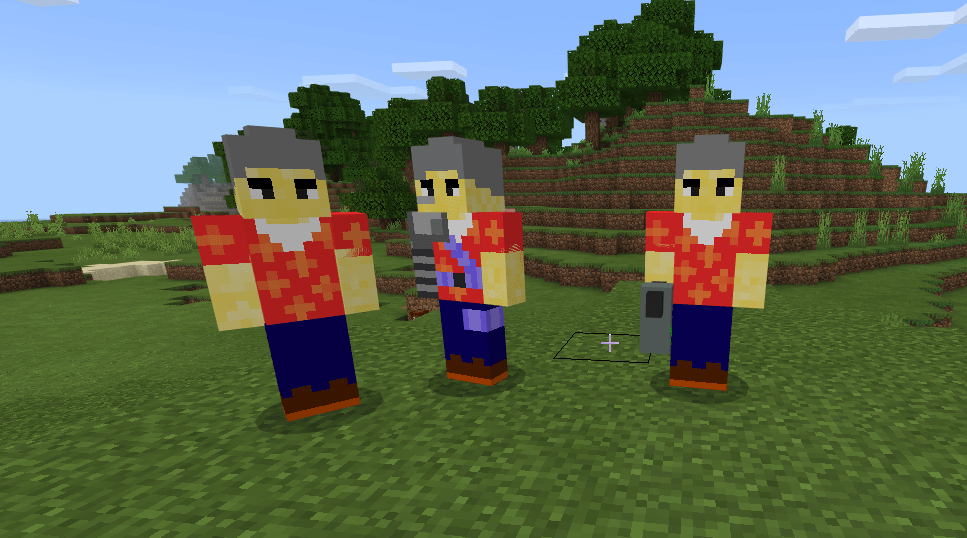 Grandpa Max with a laser gun: 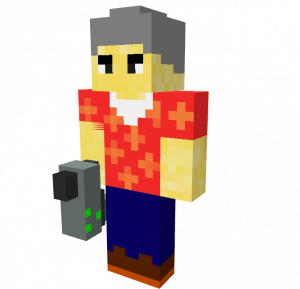 Grandpa Max with a robotic arm: 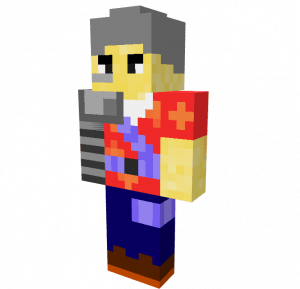 Rust Bucket: An old rusty car owned by Ben, Gwen and Grandpa Max. This is a camping vehicle that has several secret weapons for fighting aliens. 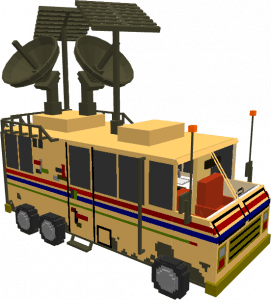 Charmcaster: The caster of magic. She has the same abilities as Gwen, except she can summon stone creatures. 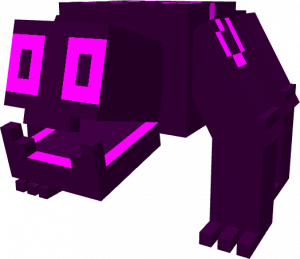 Kevin Levin: Has the ability to absorb and recharge energy from objects and the environment. He can even absorb Ben’s Omnitrix. 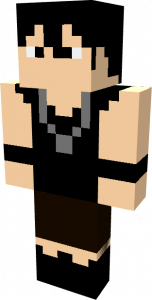 Kevin-11: This is Kevin Levine, who absorbed Ben’s Omnitrix and turned into a combination of all his aliens and their abilities. 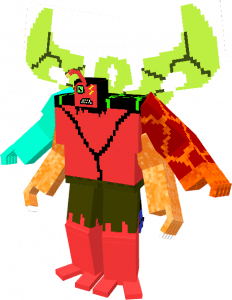 Vilgax: the main enemy of the Tennyson family, a squid-like alien who wants to take over the Omnitrix and conquer the planet. 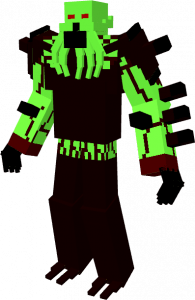 Werewolf: Similar in appearance to Benwolf, except he has purple eyes and a purple sonic howl. 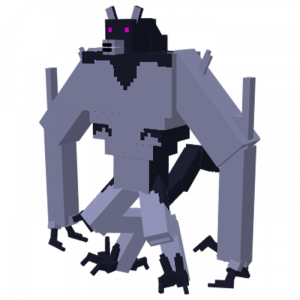 Mummy: Similar in appearance to Benmumia except that he has purple eyes and collects corrodes to become faster and stronger and infect other entities in the game. 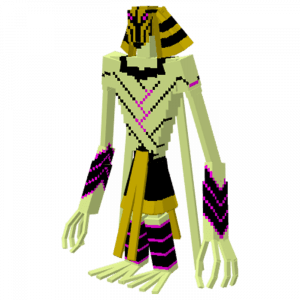 Evil Ghostfreak: Stuck in Ghost form, but eventually managed to gain control and escape on Omnitrix, becoming one of Ben 10’s most dangerous enemies. 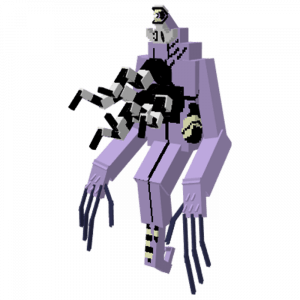 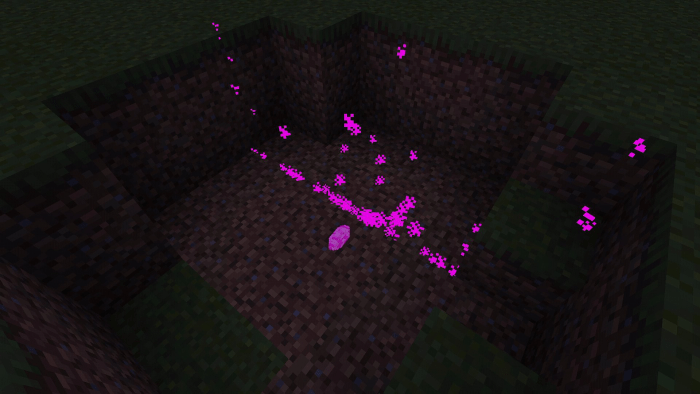 Purple glowing crystal with mutagenic properties. This element can cause side effects in some entities. Mummies hunt for this element. Entities affected by this element make them dangerous and aggressive.

Entities that can be affected by corrodium:

How do I become immune to corrodium?

Creatures that are immune to corrodium are Ghost, Benmumia, Benvolk, Mummy, Werewolf and Devil’s Ghost. To prevent players from turning into aliens, you can wear protective suits to protect yourself from corrodium. Use the command ‘/give @s cor:hazmat_suit’ to put the suit on, and ‘/function unwear_hazmat_suit’ to remove the suit.

How to get an Omnitrix by a player

There are 3 options for players to get the Omnitrix:

How to Use Omnitrix by a Player

Once you’ve successfully obtained the Omnitrix, simply right-click while holding the Omnitrix in your hand to select the alien. Then with a long tap on the screen or by right-clicking, transform into the chosen alien.