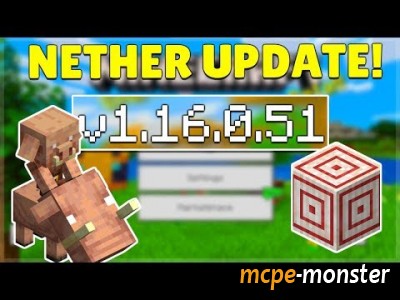 Download Minecraft PE 1.16.0.51 for Android Beta version you can below. Mojang added many new stuff in this version like new biomes, blocks or mobs. You will not see many bugs and crashes also.

Biomes
Warped Forest
New biome which you can find in Nether. There will be many new blocks and mobs.

Crimson Forest
New biome in Nether. There you will meet new mobs like piglins or hoglins. New blocks also.

Blocks
This update will add more than 15 new blocks such as soul soil, crimson and warped stems, crimson nylium and many other.