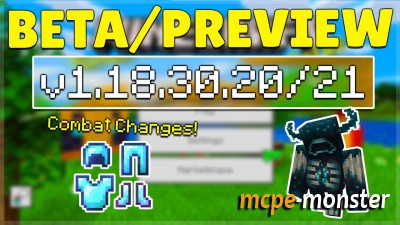 New update is already here! Download Minecraft PE 1.18.30.20 you can right now. As usually Mojang added some feature and fixed bugs. Good news is that we should waiting for new mobs soon. Developer fixed a lot of bugs in the next categories: UI, mobs, VP, gameplay, marketplace, items, etc.

What new latest updates added?
Mojang is continue to improve the game and add some features such like mobs and blocks. The main goal is to make Bedrock version look closer to computer version of the game. The difference between these versions is not only stuff but also graphic, textures, logic and programming side.New devices become more smart and it helps to reach Mojang goal.

Frogs
The last mob which Mojang added. This mob look realistic and even has sounds. To see frogs you can go around swamp biomes. As you know they can’t live without water.

Froglight
You can get it when frog eats tine magma cute. New block has 3 colors and fully transparent.