New Slime Block Robots redstone map for Minecraft PE consist of sixth big robots which was built from redstone and slime blocks. You can active them and they will walk. They have a weapons and able to attack enemies and hostile mobs. It is awesome map which I never seen before.

How to make robot move

Come closer to robot and try to find place with 3 observer blocks, then take flint & steel and tap on this place. This method helps you activate your robot and he will move. 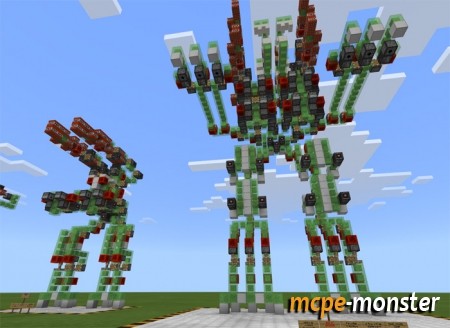 How to make robot stop

At first, check the engine, it have to be stopped. And from the engine (or the designated cockpit), put a redstone block (or redstone torch) below.

I very recommend this map because it is really cool and unique redstone idea.