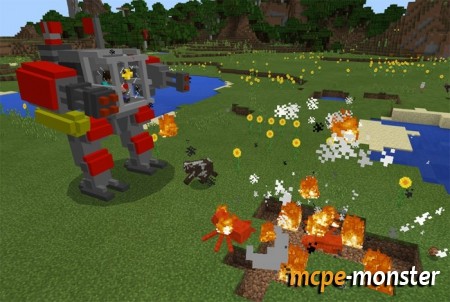 AdventureRobot Addon for Minecraft PE adds huge robot into your game. Robot replaced by Stray mob, you can find this mob everywhere. You able to ride robot, move faster and launch missiles. Now you will not afraid hostile mobs in your world. The robot model is awesome too!

How to make robot?

You can try to find him. As I said, robot replaced by Stray mob. You can search as in Nether as in Overworld. It is easy to find. You can also create new world with creative mode, open your inventory and take spawn egg.

How to ride the robot?

For iOS/Android: Long press with stick on the robot and push appearing new button

Take Remote (Fishing Rod) in your hand and hold it.