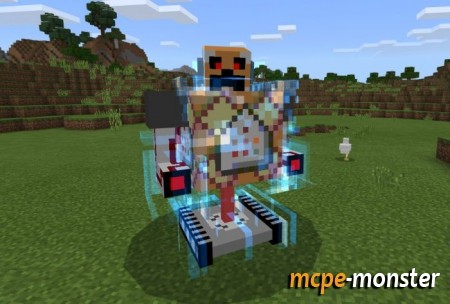 Commander Boss Machine Addon for Minecraft PE adds new boss into your game. New boss will be smart, foxy and powerful. For example, he will summon monsters and make teleportation to you. Addon also replaced pigs, they will hold TNT on the back and will be very dangerous mobs.

How to find new boss?

You could find him in Overworld, because he will replaced by greeper. Of course, you can also craft him by yourself. You need to get creeper spawn egg and through it out.

How boss will look like you can see on the screenshot below.

As I said already, Boss can in every time summon hostile creatures and make things harder.

On the last screenshot you could see how pigs in your world mutated. Now he will hold TNT bomb and could blow up.