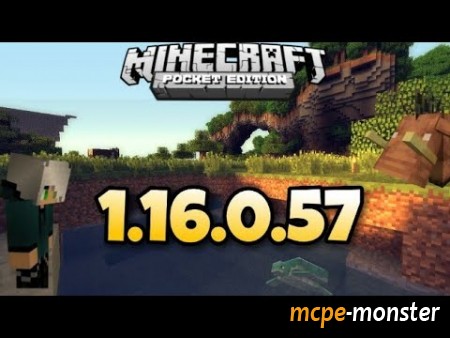 In this article I will explain what is new in Minecraft PE 1.16.0.57 version. Mojang tried really hard and added many new stuff such as new blocks. mobs, stones, structures and many other. I think it will very important to know something about new stuff for you. Let’s go.

Bastion Remnants
New structures has 4 types of bastions. You can find there a lot of treasure. but also can meet with monsters like Piglins. Mojang added new music in that area.
Blackstone
Can be found in Bastions and can be used for craft.Lodestone (Experimental)
A new block that can help you get your bearings!

recipeRespawn Anchor
it helps you set your respawn point in the Nether.
you have to charge respawn anchor with holding glowstone (or dispenser)New mob Strider
He is neutral and you can ride him! Just put on him the saddle and use mushroom-on-a-stick to choose moving directionNew mob Zoglin
When Hoglins come to Overworld they will mutate in Zoglins. They are hostile.How to make Netherite tools and armorSoul Speed
you can get it by bartering with Piglins.
it can help you to move through soul quickerNew music will be added!
Three new tracks will be added if you visit Nether Wastes, Crimson Forests or Soulsand Valleys.

What the video review